Amy Smith is known for porcelain Yunomi and bowl forms.

The yunomi are thrown and altered before Smith draws black line figure on the white surface. The bowls are thickly wheel-thrown then landscape referenced landscape patterns are carved into the interior surfaces. The glaze breaks over the edges of the carving leaving exposed porcelain. At other times the interior floor of a bowl is carved with raised areas. The glaze becomes a pool of glaze with the appearance of round forms floating on the surface. Her color pallet consists of very light colors with an emphasis on white.

For a number of years, Amy Smith and Simon Levin have collaborated in a unique way. They ship finished, fired work to one another. Each artist responds to what they receive. There is no conversation about what each has presented or will do in response. The pairing of Smith’s white work with Levin’s heavier wood fired work allows each piece to gain visual energy and the completed piece becomes a unique product of artistic collaboration. 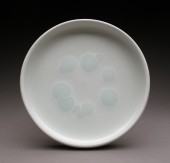 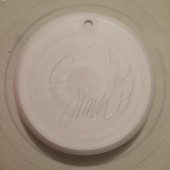 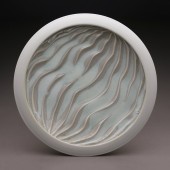 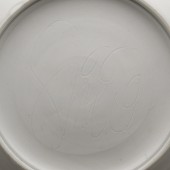 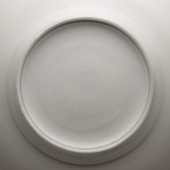