—Art, design, and engineering in Hungary, Germany, and Czechoslovakia

Francis Joseph von Tury was known as a ceramist, designer, and craftsman. In addition to the one of a kind pieces produced in his studio, his designs were mass produced by ceramic companies.

Perhaps von Tury's most important contribution to the ceramic field was his work on developing the single firing process now commonly used in industrial settings. When discussing his studio work, he described his process this way. “In my production of single fired porcelain art-ware, I use raw feldspathic (containing feldspar)[1] glaze heavily applied, resulting in a flow of the decoration under or in the glaze which gives a distinctive quality to my work. To achieve various effects I apply layers of colors and glazes which are flowing over the form. I use various decorating techniques underglaze or overglaze decoration, majolica, faience, craquelure (“Craquelure affecting the glaze in ceramics may develop with heat, but has also been used as a deliberate decorative effect, which has a long history in Korean and Chinese Pottery in particular.  These deliberate glazing effects are usually known as “crackle”, with “craclkle[d] glaze” or “crackle porcelain’ being common terms.”)[2], slip, spray, and sgraffito or I use the glaze itself in order to achieve textural effects such as frost, lava and crater glazes.”[3] He also produced or designed numerous pieces with brush painted floral decoration.

Von Tury was a fourth-generation potter whose Hungarian family operated a ceramic business in Transylvania. He emigrated to the United States in 1929. Impressed with his work in porcelain, Aileen Vanderbilt Webb, founder of the American Crafts Council, sent numerous potters new to the United States to learn techniques from him.[4] 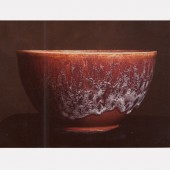