Sara Swink is known for hand-built small-scaled, colorful anthropomorphic stoneware animal figures. These sculptures are narrative in nature, with a folk art quality. Swink works with a gritty clay body to form the figures which are finished with surface treatments including incising, oxides, brushed underglazes, and glazes.

Swink grew up in San Francisco where she was influenced by the San Francisco Funk Movement thriving at the time. Her mentor and teacher Coeleen Kiebert was also a strong influence.

Last name in script, scratched through a layer of slip to reveal the color beneath. 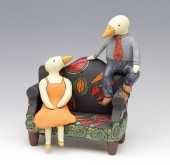 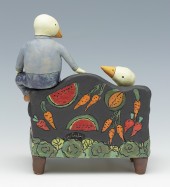