Randolph Silver is best known for large hand-build trompe-L’oeil sculptures often in the form of an industrial teapot resembling rusted machinery. Silver also creates wheel-thrown floating clay sculptures which contain silicone.  Silver came upon the use of silicone in clay while studying ceramics in Japan.

While the interior of the sculpture is traditionally glazed and fired in a gas-kiln, the exterior of the piece is coated with an iron patina and left outside to rust. Silver was inspired to do this work after a trip to a retired oil refinery and reflecting on the short comings of Western culture.

The Marks Project is not aware of any signatures or marks for this artist.
Frog Figurine
Form: Sculpture
Materials: Clay
Method: Hand Built 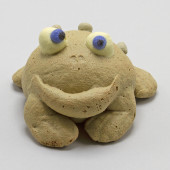 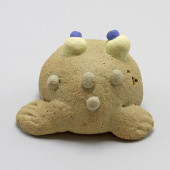 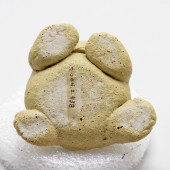