1935 Born The Hague, The Netherlands

1971-present Founder and President of Corporate Art, and Cricket Enterprises

Suzi Pleyte is most well known for her large ceramic murals installed in public spaces throughout the Hawaiian Islands. Her work is characterized by bright colors and shapes influenced by her Hawaiian surroundings.

No assignment was too large for her design team who together with Pleyte did a great deal of research before beginning a project. Pleyte moved to Hawai’i in 1964 and married Claude Horan also a ceramic artist.

State Foundation for Culture and the Arts, Honolulu, Hawai’i 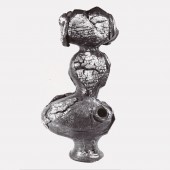