Daisy Nampeyo's  early work is characterized by the motifs found on shards from the Sikyatki ruins that were made popular by Nampeyo.  Her pieces were typically coated with white slip before the polychrome images were painted on. After she married Poblano and then Hooee she lived at Zuni Pueblo. She continued to use Hopi motifs while being influenced by ancient Zuni pottery traditions. These include the use of white clay and the high shouldered water jar form.

She was a granddaughter of Nampeyo and the daughter of Nampeyo’s daughter, Annie Healing. She began learning to coil and glaze pots from her grandmother when she was still a child. Daisy inherited the Nampeyo vision problems and needed surgery while a teenager. Her surgery was paid for by a wealthy patron who also sent her to school in Paris and took her on trips around the world. She returned to Hopi Pueblo when her mother’s health began to fail. Daisy married Ray Naha, she went on to marry twice more, first to Leo Poblano and then to Sidney Hooee. 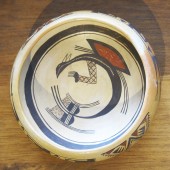 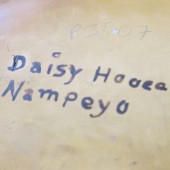