Christine McHorse is best known for her handbuilt sculptural vessels made of native micaceous clay. Her earliest work was based on traditional Pueblo pottery, which she made for over ten years. In the mid-1990’s, McHorse began to create nontraditional one-of-a-kind vessels and sculptures, often of micaceous clay which fired to satin finished black, some with snake and animal motifs and fired using electric kilns.

McHorse was a Diné (Navajo). She learned her ceramic craft from Lena Archyleta of the Taos Pueblo. According to a 2000 article in Art New Mexico, Christine McHorse considered her parents and siblings as her foremost influences and teachers.

McHorse was an outspoken activist for Native American artists’ self-advocating. “She showed us we could come in on our own terms, with grace and integrity.”1

“Her real strength was her voice.”2

"McHorse" scratched into base of pot. 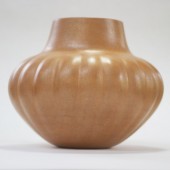 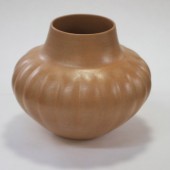 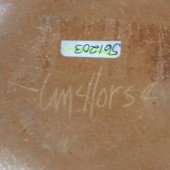