Maney spent a number of years away from clay while she raised her 7 children and attended Haywood Community College. In 1950, she returned to pottery with her husband, John Henry Maney, as a co-worker. They invested in a potter’s wheel to speed up the process which had previously been done using the coil building method. John Maney then fired them in a 55 gallon metal drum. Color of work was controlled by position of the drum lid.  To produce black work, the drum lid was closed. An open lidded drum firing produced work with a natural fired clay color sometimes with flashes of black.

Together the Mandys produced a line of pottery steeped in tradition but they also introduced new forms including footed vessels, cremation urns, vases, bowls with an applied Indian head and seven-sided peace pipes.

Maney’s main influence was Ewi Katalsta, the last conservator of pottery among the Eastern Band of the Cherokees. Maney said this about her training, "I was about six or seven when I started doing pottery. When I was a girl growing up, we used to dig our own clay up here near the Macedonia church on the creek bank. My older brother had a sled and a steer, and he'd haul the clay home. And then we'd lay it out on the ground and spread it out and let it dry." After cleaning the clay, they used an old meat grinder to grind it up. Initially, the pots were either fired in the family cook stove or in pits in the ground.

2The Qualla Boundary is referred to in most of the North Caorlina Cherokee potter’s biographies, Anna Fariello reports :  “The land owned by today’s Eastern Band of Cherokee Indians comprises a small portion of the original 140,000-square miles of their homeland in the southern Appalachians. The Qualla Boundary is not a reservation, although many call it that. The land that forms the Boundary was not given or assigned by the federal government, instead the remaining Cherokees purchased the tract after federal removal policies drove most of them westward. By the late 1880s, the land was chartered by North Carolina and recognized as belonging to the Eastern Band.Today’s Qualla Boundary is approximately 56,000 acres, located in Jackson and Swain counties. The town of Cherokee functions as he hub of the community and the seat of tribal government.” Citation: Anna Fariello 9/9/2017 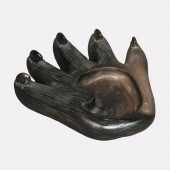 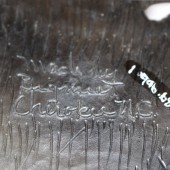