Often these commissions used tons of clay and were constructed in one piece on large slanted tables and then cut into manageable pieces before being fired. The largest of these is 40’ long and 9’ high. These pieces were characteristically unglazed terra cotta deeply carved reliefs.

Gerald Theibolt, a former student, aided her in the construction of a number of the major commissions. 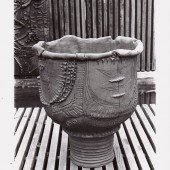