Harvey Littleton is known for thrown stoneware functional pieces. He chose to throw off the hump allowing him to produce up to 150 pieces in a day.

He grew up in the glass world of Corning, New York but chose to work with clay because he wanted the small studio environment the media allowed. Littleton studied with Nora Braden, a student of Bernard Leach, at the Brighton School. He studied Industrial Design at the University of Wisconsin, graduated and set up a design shop. After serving in the Army he went on to study with Maija Grotell at Cranbrook.

In 1962 he left the field of ceramics to work in glass. He is credited with establishing the American studio glass movement when he set up a studio to work with glass in the same small studio format that ceramic studios functioned, in doing so he removed glass from the factory.

Typically did not sign, after 1957 all works unsigned. W indicates made in Wisconsin. 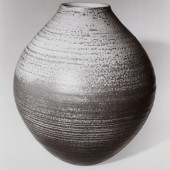 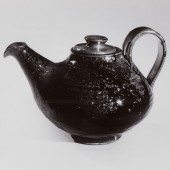