Julie Larson began working with her husband Tyrone, a self-taught potter in 1966. Tyrone did most of the wheel work, while Julie concentrated on glazing, and designing new pieces. Julie often referenced Italian pieces she had seen as she grew up in Italy. From 1966 to 1986 their work was all made using stoneware often with the addition of 23 K Gold and Platinum Lusters.

After 1986 their work was completely collaborative.  They began to cast porcelain allowing them to further develop their interest in the architectural and geometric forms they had earlier created using slab construction techniques. Julie applied a thick coat of glaze directly to the unfired porcelain forms.  She covered the surfaces with bold geometric areas then often added the silhouette of an animal. The surfaces of many of these pieces are airbrushed using slip and then given a coat of clear overglaze.

“An Exciting New Trend for the Tabletop-Contemporary American Crafts.” Food and Wine (May 1984).

Coyne, John, ed. The Penland School of Crafts Book of Pottery. Indianapolis, IN: A Rutledge: Bobbs-Merrill, 1975.

From 1966-1986 signed by maker and designer, Julie Larson or Tyrone Larson. After 1986, with the introduction of slip cast porcelain, signed Larson. In 1992, Julie Larson signed a series of one-of-a-kind pieces "Dream Porthole." On these works Tyrone Larson's initials appear TL below her name as he contributed to the construction of the works. 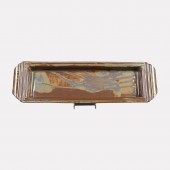 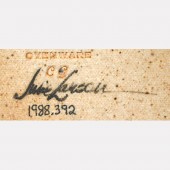 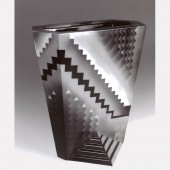 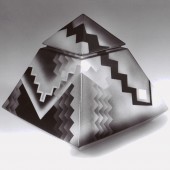