Sheldon Kaganoff is best known for his large scale thrown vessels made of stoneware or porcelain. His large scale vessels have an expressive and gestural quality as he uses varied mark making, textures, and glaze palettes upon the surface of his forms that can tower at 6’ high. Beginning in 1984 he began expeimenting with luster glazes.

Kaganoff sites “sensory awareness, Gestalt and Zen Buddhism” to be direct influences of his style. His work is often titled to expand the content of his vessels, including titles: “Self Portrait”, “Erosion Series”, that evoke a self awareness and an interest in the natural world. 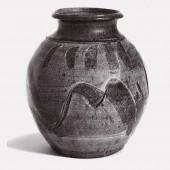 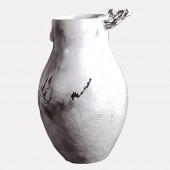