Lois Hirshberg is known for hand-built slab vessels and custom tiles; she has worked with both high-fire and low-fired clay bodies. High-fired wares are placed in a fireclay container (saggars) and then placed in the kiln to be fired.

Hirshberg is influenced by a Japanese sense of design and simplicity and favors raku firing including a surface technique in which the glaze firing is terminated when the glaze begins to melt (orange-hot in color), removing the object with tongs and directly plunging it into a container of horse hair and closing the lid. The heat of the object combusts the horsehair using up the oxygen and creating a reduction atmosphere. After three minutes, the object is plunged into water to fix the surface effect.  Another surface treatment used by Hirshberg is terra sigillata.

Signature, “Hirshberg” in script, usually on side of pot, inscribed using her grandmother’s knitting needle. 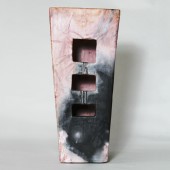 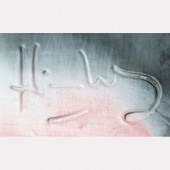 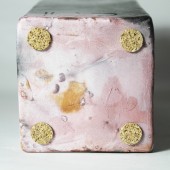