Fox alters and adds onto each piece to develop the complicated forms and then refines the surface. Fox carves, pokes, stamps, adds clay appendages, and impresses natural material and found objects into the clay. Color is very important in Fox’s work. She applies layers of glaze which she then scrapes through revealing areas of various stages of glazing, colors and textures. Most of her work is oxidation fired to cone 6 in an electric kiln.

While at the University of Georgia she studied with Andy Nasisse and Ted Saupe.

“B.Fox” carved into bottom of work. 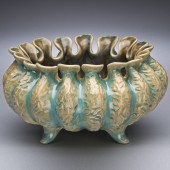 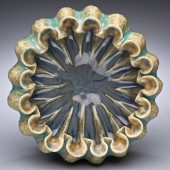 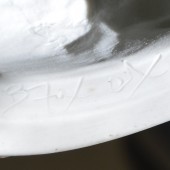