Robert Engle is known for developing screen printing and decal work in a noncommercial studio on functional wheel thrown white stoneware vessels.  He was part of the Pop Movement in the ceramics of the 1960’s..

While Engle began his career as a more traditional potter, his iconic pots often feature screen printed photographs, mostly of celebrities, on his pots.

In a Ceramics Monthly (January 1970) interview “The Man Behind the Faces,” Engle spoke about how a trip to Japan in the mid-60’s changed his approach to ceramics, and ultimately, the mark he wanted to leave on the art world. During this trip, Engle came to the conclusion that he did not want to be a craftsman, making safe, functional work, but an artist who pushed the boundaries of what could be. He began to engage with pop art because he liked its mixed media approach, and then began to combine photography with clay, to “break down the barriers between art and life[1].”

“Engle” written in cursive, in slip, on the bottom of pots. 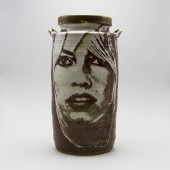 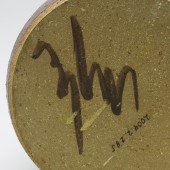 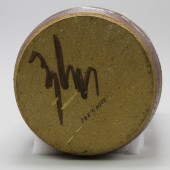