Caplan served in the 84th Engineer Battalion, where he helped manufacture and photograph dummy boats, tanks, and other military machinery. Later, Caplan worked in the pipe industry which influenced his sculpture.

During his career Caplan experimented with many innovative techniques, such as sculptures which began as giant extruded pipes. To eliminate the tasks of scoring and applying slip, he  used metal nails to build ceramic sculptures. In a Ceramics Monthly article from May1989 he described this process as: “Using nails as a fastener instead of slip results in a much more spontaneous joint and allows one to literally ‘draw in the air’…nailing clay is not unlike nailing wood except that clay has tremendous plasticity and can be bent or warped[1].”

Caplan developed many processed for working with clay, one he named “reduction stenciling.” Utilizing the potential of the raku firing’s reduction process, he developed a stencil technique to control the black patterning on a clay surface.

As the son of Ukrainian Jewish Immigrants, Caplan was also recognized for his creative work with in the Jewish community of Pittsburgh, Pennsylvania.

Inscribed “Caplan” in cursive, with the year. 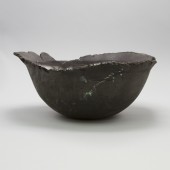 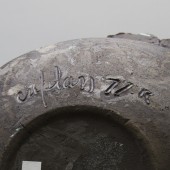 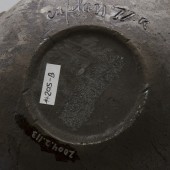