Joe Bova is a sculptor known for his figurative sculpture and vessels which incorporate human and animal imagry with anthropomorphic expression. Common animal subjects are birds, dogs, monkeys, pigs, and rabbits. Forms vary from face jugs to jars, sculptures both on plinths and wall hung.

Bova’s developed sculptural works many of which show the seamless integration of the animal forms and vessel. During different periods of his career, work has dealt with social and political topics. Bova utilizes the animal form as ‘symbols, surrogates and totems’.  He is influenced by the ceramics of Mexico and of the Mochica peoples of the northern coast of Peru which is known for jars in the form of the human head with stylized motifs. The Mochia influence is seen some examples of Bova’s work of the late 1970s through the 1980s.  In 2006 Bova, began to create a focus on animal forms and imagery and the teapot form, Bova describes these as ‘the pot incognito’. At times, Bova incorporates the human and animal forms. In certain cases eroticism and humor are used to develop content.

Bova Says of his work, “Using animal imagery was first inspired by early the realities of hunting and fishing, and later by their power as symbols, surrogates and totems.  For much of my career I have been making social and political commentary art, often also involving eroticism. In 2006-07, seeking a respite from the polemical, I returned to the earlier and abiding interest in animal forms and imagery with a new interest in integrating the vessel, namely the teapot, with the figure. The pot incognito, you might say.”

Throughout his career, Bova remained an influential teacher.

The State of Tennessee, Nashville, Tennessee 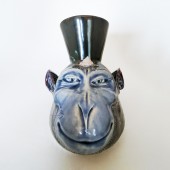 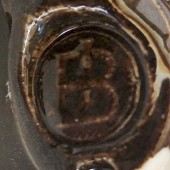 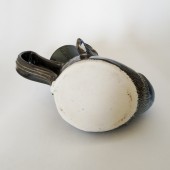