David Bellar creates functional stoneware pottery, and sculptures of frogs and other animals. He throws on the wheel and hand-builds. His work is once fired in a gas kiln; he uses slips and glazes for surface treatment. He was influenced by his pottery by an uncle, who taught him how to solve any problem with the right attitude. He is further inspired by ancient architecture and the clean lines he has found in his past work as a carpenter.

David Bellar has built all the equipment in his studio, and it was during this process that he built the first prototype for his vertical slab roller. The original HiRoller, is the result and the basis of a highly successful business.

Bellar typically places his signature, last name, by scratching into raw clay on base of pot. 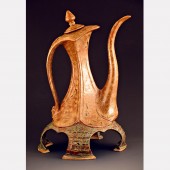 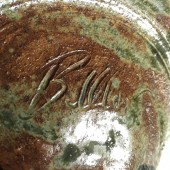