Daniel Begay works in earthenware, carving traditional forms with geometric designs. He is a Native American potter of the Santa Clara Pueblo. Begay is of Navajo or Dine heritage. He was taught the craft by his father, Harrison Begay, Jr., a son of Pueblo potter Harrison Begay, Sr.

Daniel Begay is influenced by cultural traditions of his upbringing and members of his immediate family. In addition to his father, his daughter and wife were also artists.  In the Santa Clara Pueblo, he was exposed to countless potters, sacred cultural stories, and an environment that nurtured creativity.

Typical mark as of 08-2017 is first name, “Daniel,” printed in capital letters with two- digit date underneath name, on base of pot. 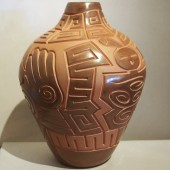 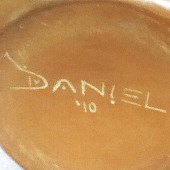 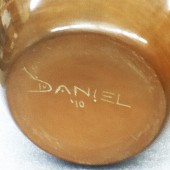