Whitney Atchley made vessel forms with abstract and figurative decoration in the 1930s and 1940s.

Atchley’s ceramics career started at Cowan Pottery as a ceramics designer. Together with Russel Aitken, another designer from Cowan, Atchley founded the Pottery Workshop in Cleveland. He, then, headed the ceramics department at the California School of Fine Arts and became a technical advisor for the Works Progress Administration (W.P.A.). Atchley exhibited at the Syracuse Ceramic National in 1933, 1937, 1941, 1947, 1949 and 1950.

A Speech Before the Second National Conference on Handicrafts, Penland, North Carolina by Whitney Atchley September 3, 1940, is available from the Archives of American Art at: https://www.aaa.si.edu/collections/holger-cahill-papers-6730/subseries-4-2/reel-5291-frames-0328-0336. 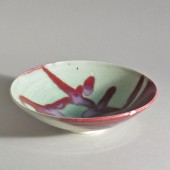 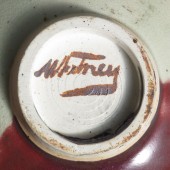