Brooks selects construction methods based on what an idea calls for, rather than executing work in a particular style. Brook's pieces vary both in style and appearance. Surface decoration also varies among forms from traditional glaze, to decals, and mixed media applications. Brook's work is ultimately guided by what he is trying to communicate at any given time. Subject matter includes the human figure, the human psyche, social mores, and sexuality.

About the impetus of his work, the artist states, “There is a space that exists upon the tip-of-the-tongue, one characterized through a curious sense of elusive certainty. Taste aside, it is concerned with imminence and inaccessibility, language and memory. Sometimes the first word out of our mouth is hardly a word at all, but rather this inarticulate sound that is more closely related to what we would identify as gesture. Suspended, held at the cusp of verbalization, there is something there and you feel it strongly. It is a haunting moment; it is a structure of feeling. The investigation of such a quality, one that is (at times) more properly sensuous than cognitive in its scope and depth of inquiry, is one at the core of my work and studio practice.“

The Marks Project is not aware of any signatures or marks for this artist.
Coming Out
Form: Wall Hanging
Materials: Porcelain, Mixed Media
Method: Altered 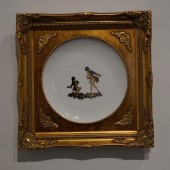 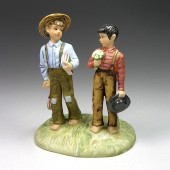 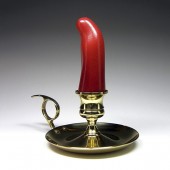 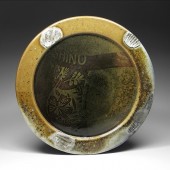