Roger Bailey primarily made wheel thrown stoneware, and porcelain with crystalline glaze. Later pieces were raku or pit-fired. (raku: a firing technique originating in Japan. In the USA, a pot is removed from a kiln at glaze maturation, and usually immersed in a post-firing reduction of combustibles such as straw, leaves, etc. resulting in a dark, smoky surface).

Roger Bailey taught ceramics at the college level for twenty years. In 1966, he began a business, Architectural Arts,  in San Luis Obispo with a former student, Roger Marshall. 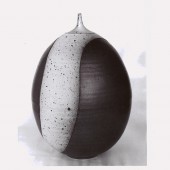